It’s just as good as before, only better because it’s cheaper.

The curvaceous 2021 Karma GS-6 luxury plug-in hybrid is essentially the same Revero GT that we drove over a year ago. It has a few small changes to back up its new name, but most importantly, Karma’s plug-in returns with a more competitive starting price.

Karma says it’s reserving the Revero GT nameplate for a future upmarket variant, which is sure to confuse some buyers. Nevertheless, the new GS-6 series — which now includes the base GS-6, the more luxurious GS-6L and the sporty GS-6S — sees a few minor revisions aimed at streamlining production and reducing the price. The GS-6 will now start at $85,700, including an $1,800 destination charge but before any state or federal plug-in tax rebates, which is significantly lower than the previous $146,600 starting price.

That said, this GS-6L example stickers at a still-shocking $114,700 with options, including $2,000 for paint, $2,200 for carbon fiber trim and $2,400 in brake upgrades. So, yeah, even the more affordable Karma’s price range is still pretty high, all things considered.

The exterior may not have changed much, but the lower price changes Karma’s calculus. The automaker hopes the more affordable plug-in sedan will wedge between premium electric brands (like Tesla and Lucid) and traditional OEMs (Mercedes-Benz and Porsche), creating a new white space in the market where the brand can grow beyond its current niche while paving the way for Karma’s first fully electric vehicle.

Karma calls the GS-6 an extended range electric vehicle (or EREV), which is technically accurate. The rear wheels are driven solely by a pair of electric motors, one for each side, totaling 400 kilowatts, or about 536 horsepower and 550 pound-feet of torque. The GS-6S trim further boosts torque to 650 pound-feet. A 28-kilowatt-hour battery pack mounted beneath the floor provides an estimated range of about 61 to 80 miles per charge, depending on whether you’re looking at the EPA’s or Karma’s own estimates.

At the end of those 80 miles, the GS-6 keeps on rolling thanks to a 170-kW range extender — the very same 1.5-liter turbocharged three-cylinder engine found in BMW’s i8. The gasoline motor charges the battery, powers the electric motors and, yes, extends the range to a total of about 360 miles. The combustion engine doesn’t mechanically connect to the wheels, so it’s not inaccurate to call this an electric car, but even Karma admits this car is really just a plug-in series hybrid, not unlike the Honda Clarity PHEV, the late Chevrolet Volt or the aforementioned BMW i8. 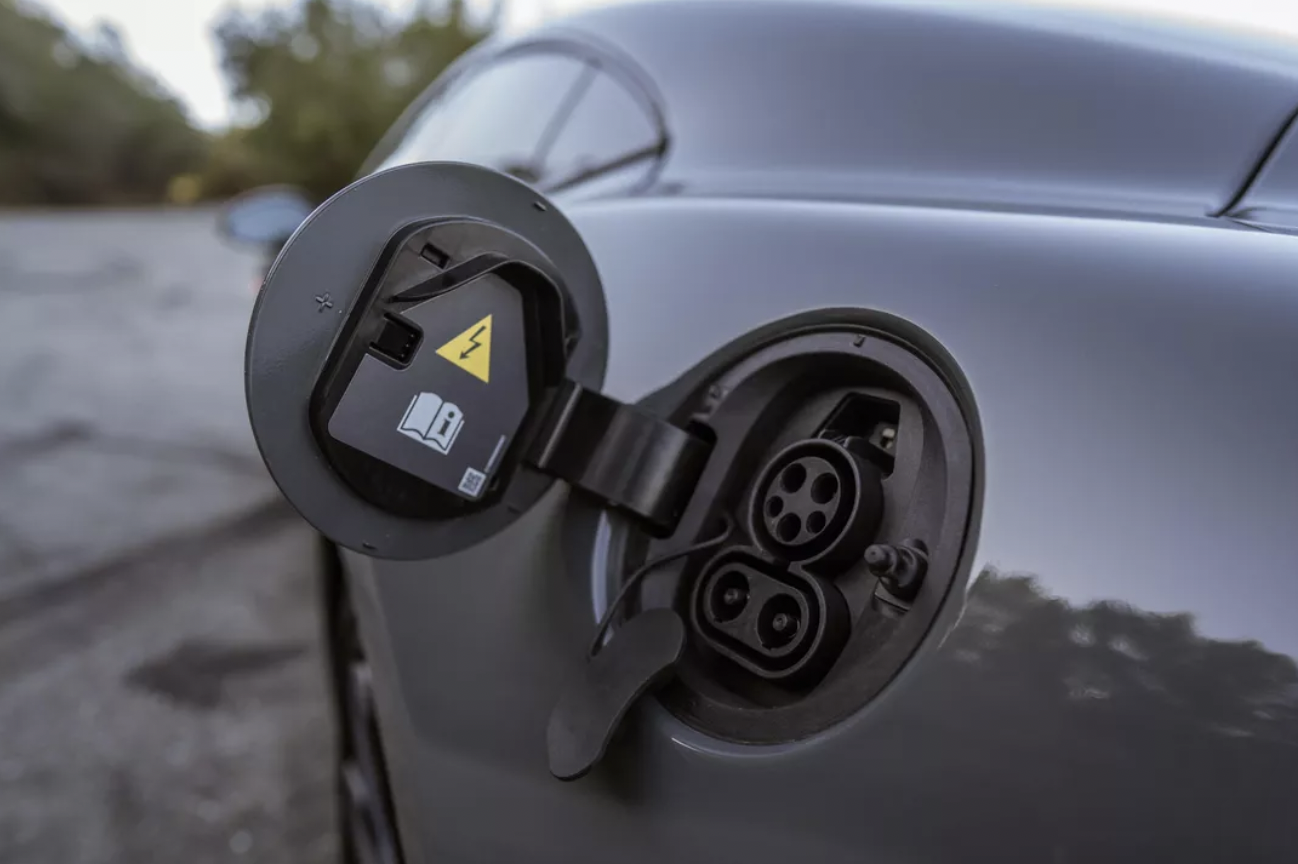 Behind one of the GS-6’s two fuel doors hides a standard SAE J1772 combined charging system connection. Plugged into a Level 2 station, the GS-6’s onboard 6.6-kW charger can fill the battery from flat in about 4 hours. At a 45-kW DC fast-charging station, it can reach 90% in as little as 35 minutes. Interestingly, the Karma is one of the few PHEVs that features high-speed charging; most balance slow charging with smaller batteries or lean more on gasoline power. The combination of rapid recharging and generous EV range (for a hybrid) makes it easier to make use of the electric half of the GS-6’s equation.

As PHEVs go, I’m a fan of this series configuration. Blending linear and instant electric torque with fast, gas station fill-ups, it’s sort of the best of both worlds. Plus, the dual motors allow the GS-6 to pull off neat tricks like simulating a limited-slip differential or torque vectoring with little more than software tweaks, adjustable with a touch on a screen.

On the road, the GS-6 certainly feels like a fully electric car, and a sporty one at that. It surges near-silently from 0 to 60 mph in 4.5 seconds (3.9 seconds for the GS-6S) with a satisfying whoosh. The long and low-slung sedan feels poised in the corners, planting itself between the contact patches of the optional 22-inch wheels — a $9,900 upgrade over the standard 21s — with remarkably little body roll thanks to a flat stance and low center of mass. The steering has a good, weighty tune. The brakes are smooth and consistent in their transition from electric regeneration to the massive, Brembo-sourced friction discs, even when driven in anger. Overall, the Karma is a very pleasant and spirited drive. 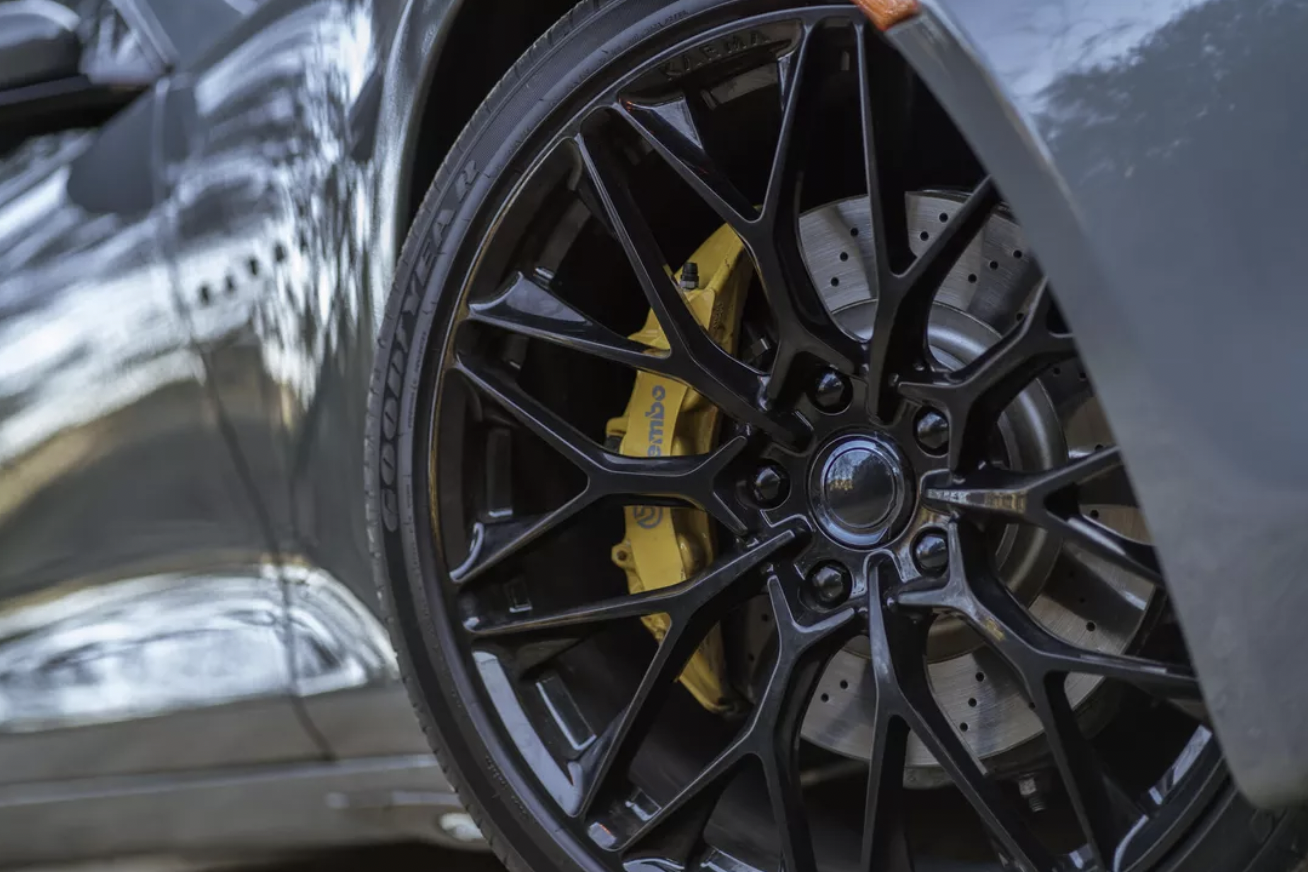 However, it’s not very thrifty in its gasoline-powered modes, where you can expect an EPA-estimated 26 miles per gallon. On battery power, that climbs to about 70 miles per gallon estimated, so you’ll want to keep the GS-6 charged as much as possible. To put that in perspective, that’s a lot worse than the Tesla Model S’ 113 mpge, but the Karma does a lot better than the Porsche Panamera E-Hybrid’s 23 hybrid mpg, 51 electric mpge and just 14 miles of EV range.

The GS-6s doesn’t have a traditional transmission, but still features paddle shifters. Rather than selecting ratios, these paddles toggle between the Karma’s three driving modes and three regenerative braking levels. The left paddle cycles between Stealth, Sustain and Sport driving modes. The Karma always starts in full-electric Stealth mode until the battery is depleted and it switches to Sustain. Sustain mode still launches like an EV, but activates the generator at about 25 mph to maintain the battery’s level. Sport mode tasks the range extender more aggressively, ensuring that there’s plenty of power for dynamic driving.

Aside from the legally required low-speed warning tone, there isn’t any artificial sound generation for the hybrid driving modes. The engine is so quiet that it’s often inaudible over wind and road noise. The exception is during full throttle Sport mode acceleration, where the 1.5-liter occasionally springs loudly to life with the most obnoxious — and hilariously flatulent — induction noise.

The right paddle toggles the three regenerative braking levels. Level 1 coasts more freely while Level 3 is essentially a one-pedal driving mode that decelerates quickly enough when the accelerator’s fully lifted to bring the GS-6 to a complete stop, triggering the brake lights along the way. Unlike the drive modes, the regen setting doesn’t reset when restarting the car, which is good for consistent and predictable braking behavior from trip to trip. 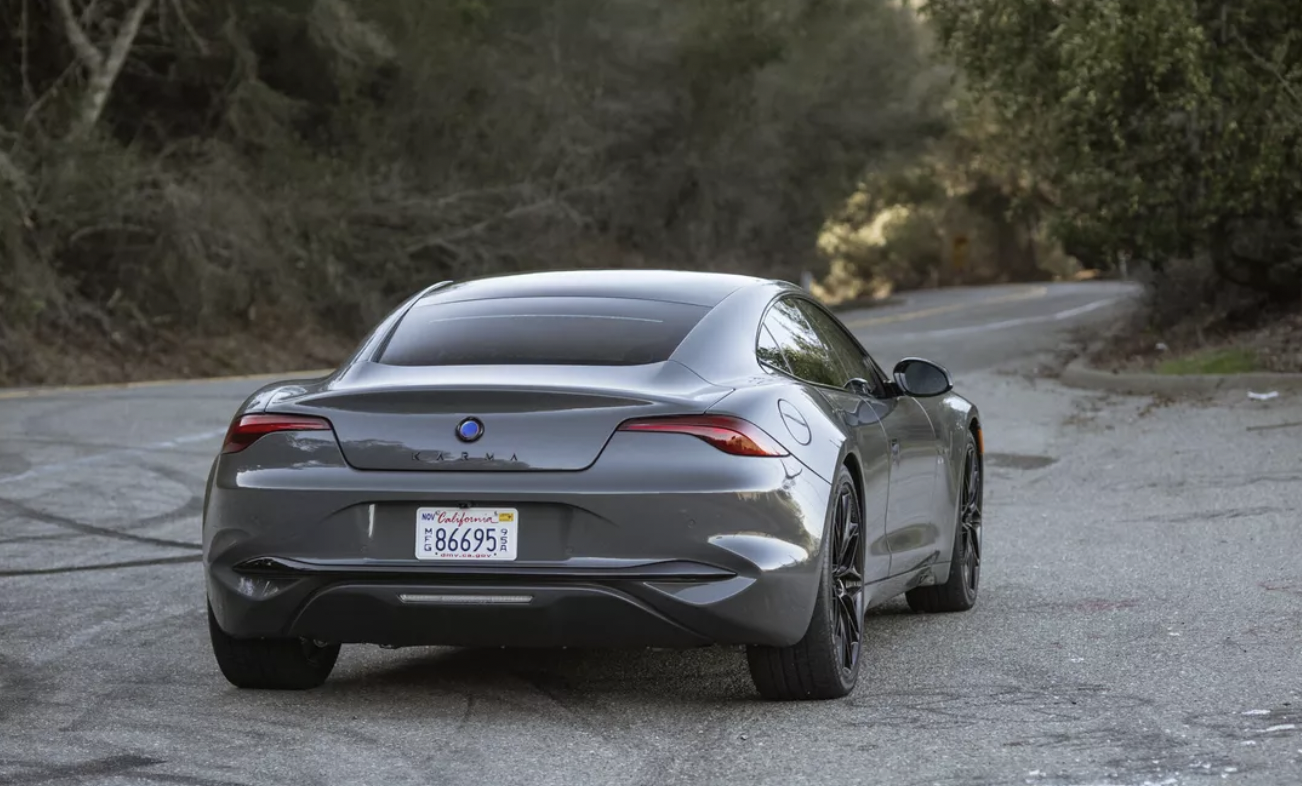 Despite the cost-cutting changes beneath the surface, the GS-6L’s interior is still a very luxurious place. My example features Bridge of Weir leather, carbon fiber trim and a high level of fit and finish. I expect the base GS-6 to still be quite nice, but perhaps not as opulent. My sole complaint about the cozy, but comfortable, driver’s seating position is that foot space is a touch cramped, causing my shoe to graze something beneath the dashboard when reaching for the accelerator pedal. My 5-foot, 9-inch frame fits into the rear compartment with a good amount of knee room, though I also have to slouch to keep my head from touching the ceiling.

Cabin tech is fairly inoffensive; the 10.2-inch touchscreen interface is simple enough that it’s hard to get lost using it. Android Auto and Apple CarPlay are standard, serving as the de facto audio streaming and navigation platforms for the Karma, which lacks onboard nav or app integrations. Honestly, I’m fine with that.

The touchscreen is paired with an all-digital instrument cluster that’s managed via capacitive controls on the steering wheel. These circular thumb pads are very difficult to master, partially because they are so small and mostly smooth, but mostly because Karma asks them to do so much. Tap incorrectly, and you may end up changing the gauges or toggling the cameras rather than just lowering the volume. What the GS-6 gains by letting me do so much while keeping my hands on the wheel, it immediately loses when I have to take my eyes off of the road to use it. Next time, just give me a volume knob. 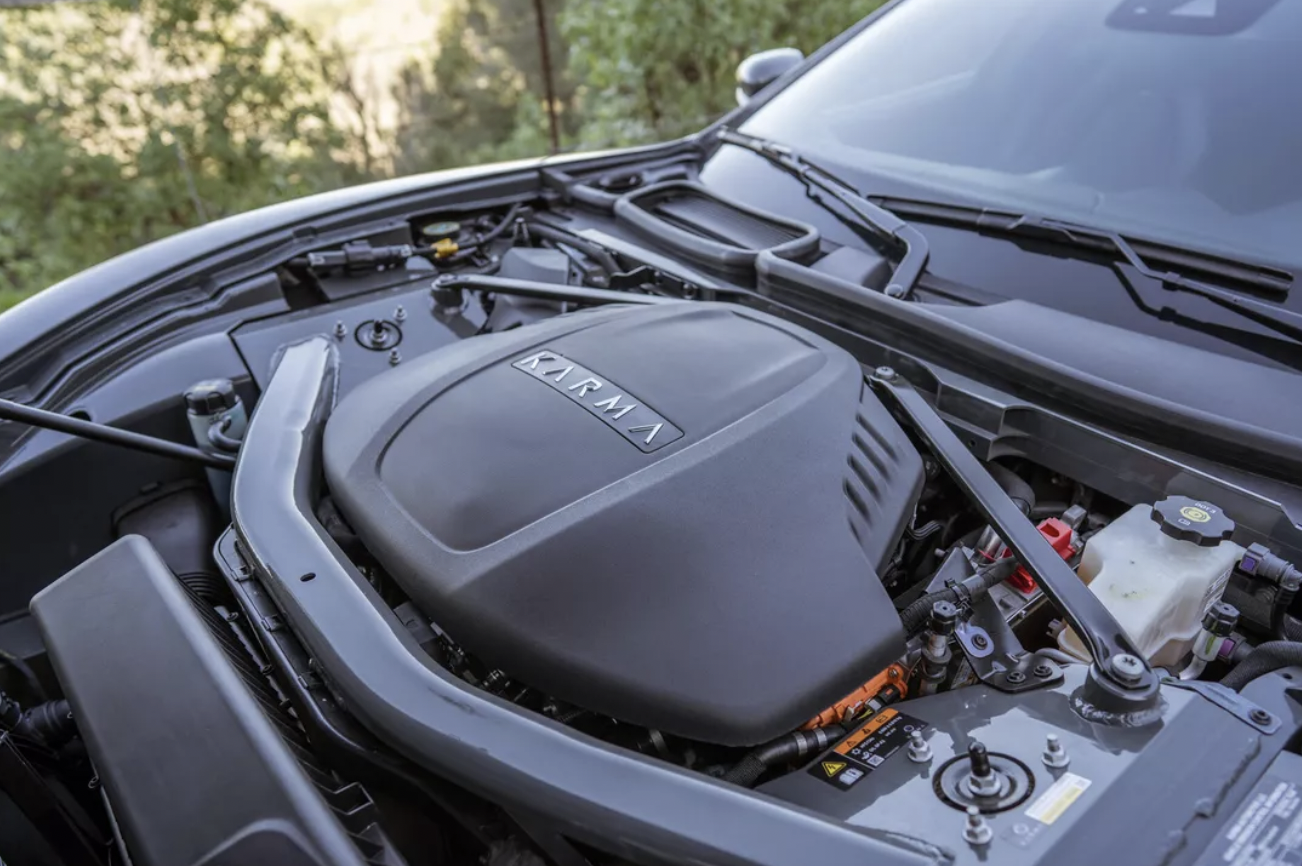 Even at the lower price, the Karma GS-6 still faces the same massive problem that the BMW i8 and Polestar 1 faced before it: It’s a plug-in hybrid that has to compete with the very best fully electric cars at this price. It will be cross-shopped with the Tesla Model S, the Lucid Air, and Audi’s upcoming E-Tron GT — all of which boast similar range without relying on gasoline. In this light, a car with a gas tank can seem like a half-step, old news, especially for the most vocal electrification enthusiasts and luxury buyers in this price range. Karma may see its flexible range extender as a benefit — and I’m inclined to agree — but for now it’s ironically probably the detail that will keep this the GS-6 in a fairly small niche.

The all-electric GSe6 variant, which is scheduled to arrive near the end of this year, can’t get here soon enough.