The 32nd annual awards event, held virtually Thursday and hosted by Niecy Nash, also saw awards go to Netflix’s ‘The Boys in the Band’ and ‘Disclosure’ as well as the Paramount+ series ‘Star Trek: Discovery.’

Schitt’s Creek continued its dominant awards season haul by picking up another prize, the latest acquired Thursday night during the 32nd annual GLAAD Media Awards. It was the beloved series’ second straight award from the media watchdog organization and it follows top prizes at the Emmy Awards, Golden Globes and the recent Screen Actors Guild Awards.

Tonight’s virtual ceremony, which premiered exclusively on GLAAD’s YouTube channel in partnership with Google before streaming later this evening on Hulu, also saw top prizes go to Clea DuVall’s Happiest Season, Joe Mantello’s The Boys in the Band, Sam Feder’s transgender representation documentary Disclosure, the Paramount+ series Star Trek: Discovery and pop star Sam Smith. In total, there were nine competitive categories announced, with the other winners revealed in advance or rolled out today on social media in conjunction with the show.

Also, multiple presenters called out the wave of attacks on the community, including the violence facing trans women of color and the anti-trans legislation circulating across the country, particularly in Arkansas which became the first state to block medical care for trans youth.

“Friends, I’m so proud to stand with the LGBTQ community tonight, just as the LGBTQ community stands with Black and diverse communities. Black Lives Matter, Black Trans Lives Matter, and I know we’re going to keep spreading that message of unity and justice until every one of us is safe to live the lives we love,” said presenter Sterling K. Brown while announcing the award for best documentary, which went to Disclosure. In accepting, Laverne Cox said, “To the trans youth watching right now, we want you to know that you’re anointed, that despite all of the attacks that might be happening against you, you are divine. You deserve to be. You are here for a reason. You must survive to fulfill that divine purpose.” 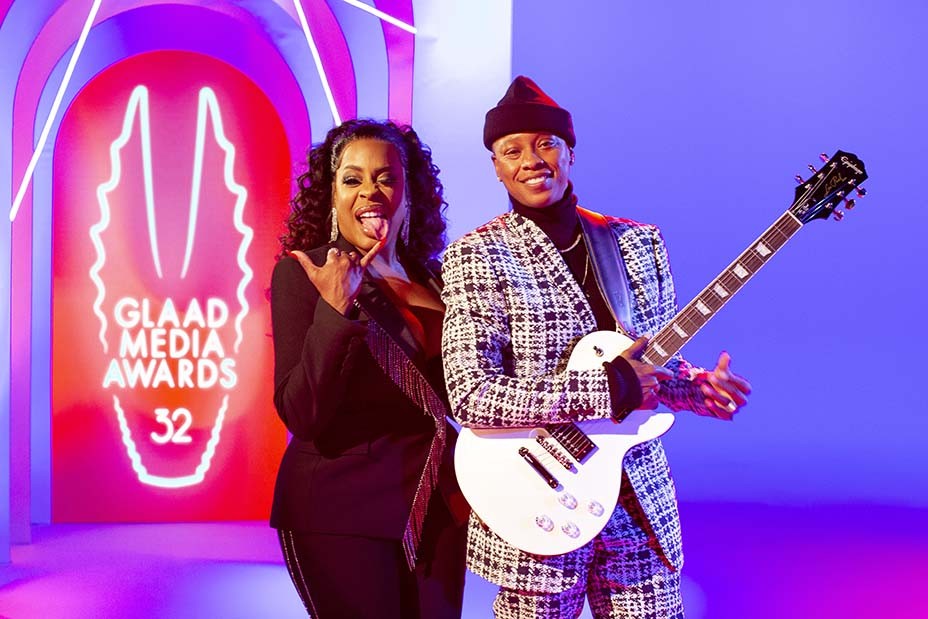 “The GLAAD Media Awards special guests and winners sent an undeniably loud message of LGBTQ acceptance around the world tonight,” said GLAAD president and CEO Sarah Kate Ellis. “This year’s award recipients, including Disclosure, Schitt’s Creek, Star Trek: Discovery and Veneno, remind us that even in times of political and cultural division, diverse LGBTQ representation and visibility can enlighten, entertain and create lasting impact, ultimately raising the bar for LGBTQ inclusion in media.”

Among the prizes was an award for best children’s programming, which went to The Not-Too-Late Show with Elmo. The title character accepted from presenter and newly-out star JoJo Siwa, who used her time to praise her girlfriend and make a plea for acceptance.